The Dark Magig Magie Noire K-cup is a pretty tasty kick in the mouth.  The first sip will wake you up and get your head in the game right off the bat.  If you’re looking for a strong cup of coffee that will pick you up in a hurry, then this k-cup is just what you need.

Once the cup cools a little, it turns pretty smooth, but the kick continues.  I found myself bouncing around my cube after a cup of this wonderful stuff.  It is a little bitter going down so keep this in mind.

Overall taste rating 4/10 — It’s okay, but I probably wouldn’t pay for another cup of it. 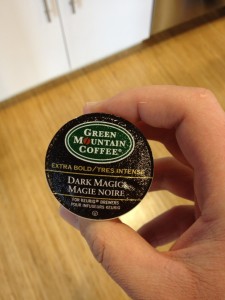 Initial thoughts
Well, I’ve had my new Nike+ FuelBand for 4 days now, and so far… Eh… I’m not incredibly impressed.

Don’t get me wrong, there isn’t really anything wrong with it… But there’s really nothing right with it either.  As advertised, it’s very lightweight, I barely feel it when I’m wearing it, in-fact I often forget I even have it on.  It’s easy to use with the single button that cycles through the options to display time, calories, fuel and steps. Not to mention pretty good battery life, as I said, I’m on day 4 using it, and still on the original charge from the first time charging it.

The thing is, I’m just really not all that impressed.  The “fuel” element seems to be a pretty arbitrary number that accumulates at an undisclosed rate.  Heck, just by putting it on my wrist and walking down the hall to the living room, I earned 3 fuel points. As far as I can tell, there’s nothing in here that can sense the difference between a light swing of your arm (like when walking) or harder swing when playing say a raquette sport.

The Good
I like that I have some consistent way of tracking my daily activity.  Even with the arbitrary nature of the Fuel point system, I can still have a daily goal to meet or exceed my previous day’s Fuel allocation.

The tool itself (medium for me) is very light, comparable to a standard watch (maybe a little lighter) and really doesn’t get in the way or irritate. Since the band is slightly elliptical and doesn’t really have any moving parts or links, it does sometimes sit funny on my wrist.  From years of wearing a watch, I have a reflex to shake my wrist to readjust whatever is causing the feeling and I can’t help but wonder how the band is interpreting this activity.

Though I have not tested the water resistance of the band in the shower, it does seem like it should hold up to a little moisture from a shower or a steam, but that remains to be seen.

The Bad
One of the more annoying things with the Nike+ FuelBand is that there is no battery indicator on the band itself, or the iPhone application.  I’ve had this on my wrist for 4 days and don’t have a way of knowing if it’s at 10% battery or 50%.

Speaking of battery, for a divice with a few electrometers, a button, some tiny LED lights (usually off), and a radio transmitter (usually off), why the heck does it go through a battery in only 4 days?  Why didn’t they think to add a kinetic charger like many watches have?  For a device that was meant to be used while working out, this could have potentially extended the battery indefinitely.

The charging dongle for it is a little awkward, I didn’t see an obvious mark to show which side of the charger should face upward.  This is just asking for people to break it in the first 2 minutes of opening it.

The battery was not charged out of the box…. on the plus side it took only about an hour to charge via USB to my Windows based computer.

The firmware upgrade I had to do failed on the first attempt which didn’t impress much, but that very well could have been a Windows issue.

I was disappointed there wasn’t something in here to monitor pulse rate.

Final Thoughts
All-in-all, I can see this being motivating for a while to try to get me to do a little more each day.  The limitations above are real, but more annoying than really hindering the functionality of the product.

In the end this is really just a glorified pedometer with LEDs, water resistant skin, and a very expensive marketing campaign.  Not at all worth $150.  I would call it a much better value at $50 or maybe $75.

With the economy finally starting to get better, I can’t help but wonder who will screw it up again next time.  It seems there are a lot of different balls up in the air, any one of which can come down, and shatter the fragile economic stability that is starting to take root.

With the housing market getting a little better, it seems that lenders are still clambering to see who they can refinance, and with what sort of insane deals they can offer to trigger them to refinance their mortgage loans.

Companies are offering interest rates as low as 3.7% for some people, while most people with great credit were lucky to get 6.7% as little as 5 years ago on a 30 year fixed mortgage or FHA loan.  I see the house of cards rebuilding.

Doctors have their hands full too with the state of healthcare being bombarded with new laws, and big pharma companies trying to cram new pills, medications, and treatments down the throats of the American economy.

Then there are the lawyers who want to sue for everything; patents, copyright, injuries, medical malpractice, you name it.  It seems that people can’t be counted on anymore to just admit they made a mistake and to move on with things.  We need to get lawyers, and judges involved in everything.

Let’s see if we can get the economy going again just to see who can be the first to screw it up next time.

The gameplay is very simple, you control a little birdie who’s wings are way too small for him/her to sustain flight on its own. You have to use gravity to help the bird gain speed and “fly” through the air. You tap and hold the screen to have the bird fold in its wings and drop to the ground. The strategy is to time the landing to land on a slope, and use gravity

and your momentum to propel you farther on the next take off.

There are two different flight modes… You can fly normally, or you can fly in “fever mode.”  Fever mode is activated when you have 3 consecutive “perfect” jumps.  A jump is considered a “perfect” jump or “great slide” when you time the landing on a downward slope, and take off on the next hill.  In fever mode you get more points when traveling across the screen, have a great slide, touch the clouds, or collect coins.  In fever mode, you generally also fly through the stages faster, and thus can get farther before the end of the “day.”

As mentioned above you score points by traveling through the “islands,” getting great slides, touching clouds, and collecting coins.  You also get multipliers depending on what “level” you’re on.  To complete a level, you need to satisfy each of 3 different random missions which can entail being in fever mode for a set time or distance, collecting coins, touching clouds, reaching a certain island, getting so many great slides, etc.

The game is very addictive, though at times it can get quite frustrating and hard to beat a particular objective.  If you find a set of islands particularly hard, just wait a day.  The islands you play on will randomize every day (real time).  Each day you play the game the islands will have different colors, lengths, heights, and different hill layouts.

Overall, this game keeps me very engaged, and I find myself playing whenever I have 5 – 10 minutes to kill.   Very well worth the $0.99!